Numerous organisms live and coexist in Greenland’s waters. One of the prominent species in arctic regions is the Polar cod, “Eqalugaq” in Greenlandic. These fish feed on zooplankton and are themselves a popular prey for bigger animals. To evaluate their importance as energy catalysts within an ecosystem, scientists like to look at stomach contents of their predators. This is helpful to draw conclusions about foraging habits, preferences, and eventually the significance of certain populations of prey for an intact ecosystem. Prey identification is, however, more often than not a difficult task, even without the substance being already digested.

During the three-day-Prey Identification Workshop, that took place from the 23rd until the 25th of November 2022, at the Greenland Institute of Natural Resources, scientists with different expertise gathered together to exchange their ideas and experiences. The goal was to study useful methods for identification, and ideally create a guide that can be a help in future research of predators’ stomach contents. 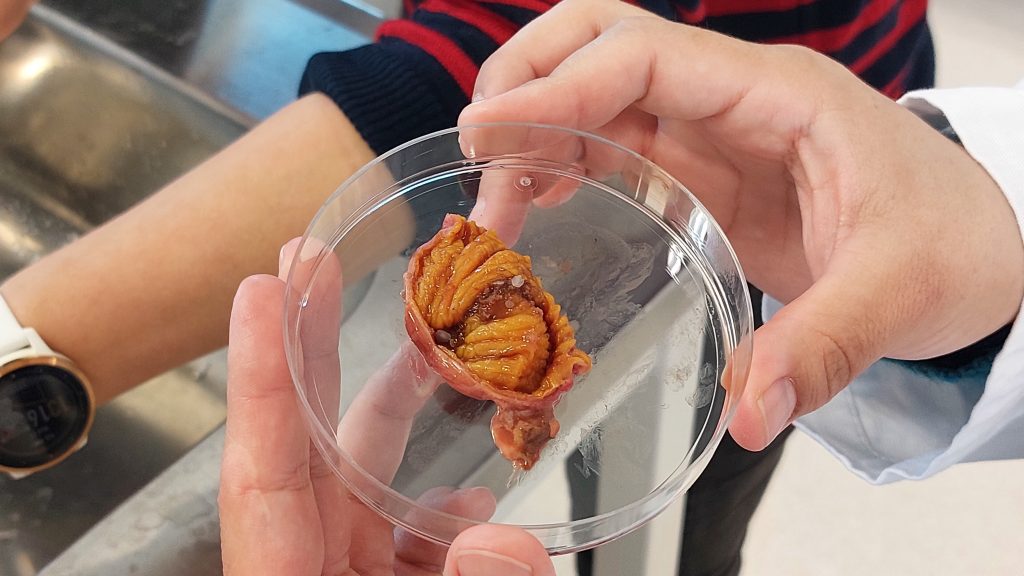 Cut open gizzard of a bird with otoliths inside

As an undergraduate student, currently doing a six months internship at the Greenland Climate Research Centre,  my reason for joining the workshop was simple: I like to learn as much as possible and did not want to let this chance pass by. Many of the other participants shared this sentiment. Most of them were from different departments of the institute, others were guests, such as freelance scientist Ole Norden Anderson. He had been invited as a teacher to share his vast knowledge in taxonomic identification developed over fifty years.

The workshop consisted of a diverse mixture of practical lab work and theoretical discussions. To prepare for the laboratory we also listened to some presentations. We received some intel on how to dissect seal and bird stomachs and were taught how to evaluate the digestion stages of the contents. Furthermore we heard an online presentation from Canadian researcher Félix Tremblay-Gagnon (Fisheries Oceans Canada) about Greenland halibut. His master thesis had been focusing on the diet of this predator and he wanted to “share his experience with fellow scientists and expand his contact network.”

The schedule was quite casual, especially when we were working in the laboratory. This made it less bland, and we were not just standing around and listening to monologues. Instead we could roam around the laboratory, see and do whatever we were most interested in, and exchange relevant knowledge and skills with others.

Not only me but also other participants enjoyed the practical work a lot. “I think the laboratory part was great because everybody was at ease to share their knowledge, all were open and curious and engaged, and it’s not that often that different departments get together in a technical workshop like that.”, mentioned Caroline Bouchard (GCRC), who organized the event. In my opinion, this captures it very well.

Personally, I enjoyed the discussions a lot, even though I did not have a lot to add myself. As a student I still have somewhat of a naïve mindset. In my head, work life is often perceived as rather formal and everyone has to know exactly what they are doing. However this workshop in general and especially all the discussions reminded me more of a classroom. Here, everyone’s knowledge is equally incomplete and they work together to make it complete.

What I learned during this workshop, were methods to dissect stomachs. I know now how to open them, take out the contents and evaluate their digestion level. Bjarne Lyberth (Greenland Institute of Natural Resources) said, he “learned about the challenges of identifying digested prey and attempts to quantify the stomach content.” I can only agree with him on that. Especially more digested fish were difficult to tell apart and you were glad if you could at least find some otoliths or even bones left in the stomach.

Unfortunately, I did not gain any book knowledge on how to analyse or identify the animals respectively. The reason is, that I simply lack experience and knowledge about the taxonomy of marine organisms, so it was all a bit too much for me to take in. Albert Einstein once said, “Knowledge means knowing where it is written.”, which is very true, if you ask me. Therefore we had indeed some books and guides to use and look up species. However, not all of them were always talking about the same things. Even if they were, there would still be differences or missing pieces of information. It was sometimes difficult to find common ground, with the references on hand.

Ole Norden Anderson suggested to have “more identification literature.” This is true. However, from an outsider intern’s perspective, with limited fundamental knowledge on the matter of marine taxa identification, it would be helpful to have the information more centralized. A guide that contains information, illustrations, and maybe even some reference pictures or illustrations, would be a great help as a last step for a successful stomach content analysis.

One of the original goals of the workshop was to create such a guide. “It was a bit ambitious”, according to Caroline Bouchard. Although, a lot of the participants would be willing to share in the effort of creating a “living” prey identification guide. I imagine a way for new realizations to be added by everyone during their research, in an agreed upon manner. Over time, a document would come to life that contains an overview of most commonly found species in predators’ stomachs, and their different digestion stages, for easier identification.

With all that said and done, I would still consider the workshop a good learning experience for everyone involved. At the moment, it is more like an unfinished book, which could use some more chapters. According to other participants, they would be eager to join in a sequel to this November’s Prey Identification Workshop. It could continue where we left off and focus more on the “Know-what” than the “Know-how”, and thus lay the groundwork for a database, to be used as an aforementioned guide in further research. 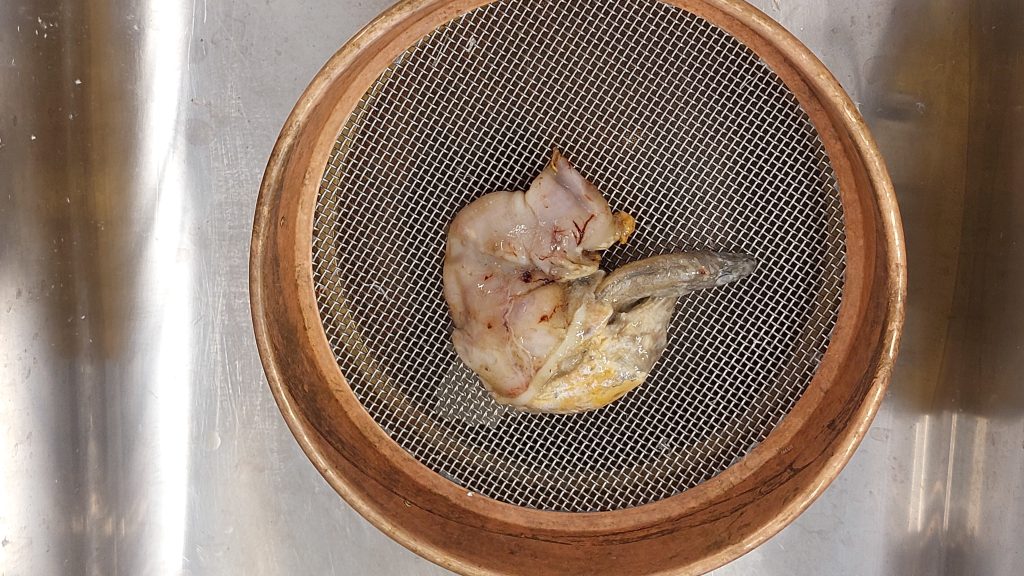 The stomach of Greenland halibut with fish sticking out.