The underwater noise around Greenland has just been mapped in a new study, thereby allowing future changes of ambient noise levels to be investigated as the polar ice cap retreats and human activities increase in the Arctic waters.

An international team of researchers from Aarhus University, Greenland Climate Research Centre, Greenland Institute of Natural Resources and University of Washington has analysed one of the largest data sets on underwater noise ever to have been collected.

The data set, which is collected under the leadership of Senior Scientist Malene Simon, Greenland Climate Research Centre, Greenland Institute of Natural Resources, contains recordings from 26 stations off the Greenland coast, where sound recorders were placed at depths of 100 to 400 m.

The recording stations provide a large geographical coverage that includes Melville Bay, Baffin Bay and Davis Strait, Southern Greenland, the North Atlantic Ocean off Tasiilaq and the Greenland Sea. The underwater sounds were recorded for durations up to a year at a time so that the soundscapes (i.e. the acoustic environments created by a multitude of different sound sources) could be investigated and compared across seasons and geographic areas.

The recording stations register sounds from human activities, marine mammals, and not least the naturally occurring noise from wind, waves, and ice.

The measurements display large variations in ambient noise over the year – variations that the scientists ascribe to the stark contrast between the ice-free period in late summer and the complete ice-cover during the Arctic winter.

Ice is a significant driver of ambient noise levels

“In the ice-free periods the ocean waves move unhindered and may play a substantial role in increasing ambient noise levels especially in harsh weather, whereas the waves are tamed during winter when the sea ice forms a lid on the ocean. Then the ambient noise may drop to levels so low that we can hardly measure it even with modern equipment,” explains Michael Ladegaard, postdoc at Aarhus University. He is also the lead author of the study, which has just been published in the peer-reviewed journal Scientific Reports.

He highlights that sea ice can play many different roles, and ice movements and temperature fluctuations can lead to periods with extensive cracking, squeaking and thundering sounds, which may cause substantial increases in ambient noise levels.

The changing acoustic conditions are something that Arctic marine mammals must adapt to and live with. Seals and cetaceans are themselves highly dependent on sounds that they use e.g. for communication, orientation and foraging. The variation of the natural ambient noise means that there is large differences in the degree by which the animals’ own sounds are drowned out by other sounds from the environment.

The risk of marine mammals experiencing acoustic masking is likely to increase in the future as the ice-free periods become longer. Malene Simon, senior scientist at the Greenland Climate Research Centre, Greenland Institute of Natural Resources and co-author of the study, explains:

“A less ice-covered Arctic is likely to result in an increased human presence in the form of new and faster shipping routes between the Atlantic and Pacific Ocean, increased fishing and resource exploitation (e.g. oil and gas), as well as increased military activities from the Arctic nations. The underwater noise is therefore predicted to also increase, but to measure an increase, we need to establish a base line for comparison, and that is where our study contributes with a lot of new knowledge for the waters around Greenland.” 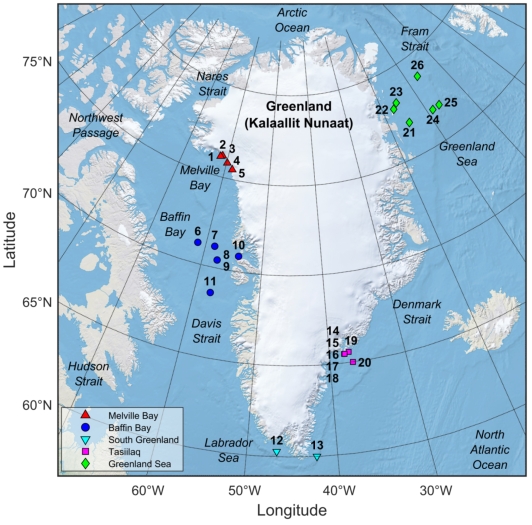 Knowledge about underwater noise is important, as it can affect marine mammals in many different ways such as hearing loss if the animals are located close to a powerful sound source, or the noise may result in hasty escapes, if the animals are frightened. Often the noise will cause less severe reactions, where animals may temporarily halt their current activities, move out of a given area, or their communication ranges are shortened. In those cases, it can be difficult to estimate, if the noise effects are just temporary or may cause longer-lasting problems such as hunger, stress or reduced mating and reproduction success.

“The Arctic marine mammals must be evolutionarily adapted to changing acoustic conditions in the sea,” explains Peter Teglberg Madsen, professor in sensory physiology and co-author of the study, and continues:

“Whether the animals are thereby well-equipped for handling even higher loads of underwater noise or if the animals are already under pressure from natural noise fluctuations is a question we currently don’t have an answer to. It is therefore important to study, how marine mammals react to different noise types and noise levels, and that we monitor the development of underwater noise in the Arctic.”

The paper ”Soundscape and ambient noise levels of the Arctic waters around Greenland” is published in the peer-reviewed journal Scientific Reports as an ‘open access’ article, i.e. anyone interested may read it for free.