Scientists from the Greenland Climate Research Centre at the Greenland Institute of Natural Resources with their colleagues from Ireland and Poland found an older landslide in one of the fjords of Nuup Kangerlua, South-West Greenland. It was the first time ever that scientists discover a landslide deposited at the seafloor in this region. It was in connection with a project, which has the goal of mapping the nature (topography) of the large fjord systems of Nuup Kangerlua. The landslide appears though to be an older happening and has a size of ca. 2 x 2 km (Fig. 1). Video footages from the slide location with a drift camera were also taken, and they showed a growth of sponges, sea anemones and other seafloor fauna on the rock debris (Fig. 3), indicating that landslide apparently didn´t happen in recent years.

Landslides are a wide range of ground movements, such as rockfalls and slope failures, which can generate tsunamis. In recent decades, tsunamis caused by rock movements have been observed in Chile, Alaska and Greenland, highlighting the risk of these abrupt events. In Greenland, the Nuussuaq Basin, central West Greenland is the main area affected by landslides, due to its geological setting.

“It has been hypothesized that, due to climate change, large landslides may become more frequent in high-latitude glacial environments, such as Canada and Greenland. Infrastructure and human settlements are at risk from these landslides, so there is a societal need to better understand the link between climate change and the occurrence of rockfalls, especially in the light of continued climate warming”, says the scientist M. Geertsema from the University of Northern British Columbia.

Mapping of the fiord system

In October 2020 – ‘Sanna’, the research vessel of the Greenland Institute of Natural Resources carried out an expedition to map the seafloor of the Nuup Kangerlua system, South-West Greenland. The goal of this local effort was to create a complete map of the seafloor features, water depths and seabed (benthic) habitats of this large fjord system. Such efforts are necessary to improve our knowledge on the complex bottom nature (topography), carved by the ice sheet dynamics and the diverse and rich benthic habitats in Greenland. The projects goal is to better understand the ice-fjord-ocean processes and support the management of marine resources in Greenland. The result of the research cruise is the nearly a complete map of the entire fjord system, and findings of the landslide, as well as some interesting features, such as gas/fluid escape structures (pockmarks) at the doorstep of Kapisillit. 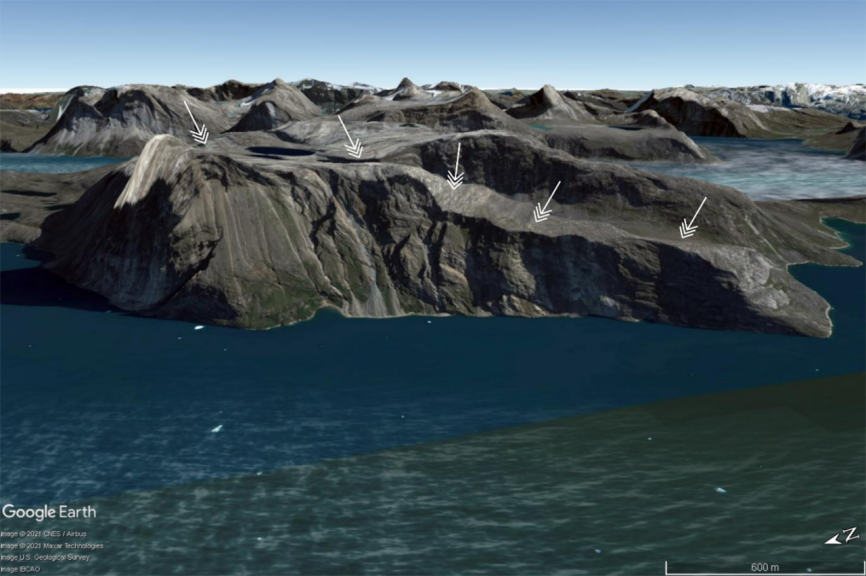 Google Earth map of the terrestrial landslide scar marked by the white arrows, where the rockfall originated. 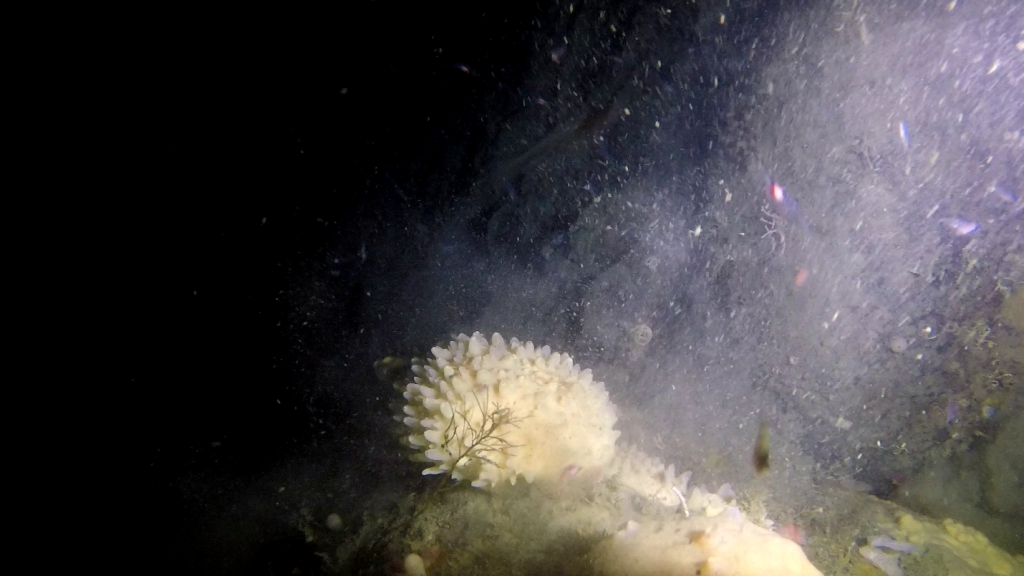 An example of benthic growth (here a Polymastia sponge) on top of the landslide location.