The Arctic is a barometer for global climate change, and the changes occur faster here than in any other place in Earth. We already see changes in climate, ecosystems and living resources, also in Greenland. With a more than 2,000 km long north-south gradient and a relatively short ecosystem gradient from the Ice Sheet to the coastal zone, Greenland offers a unique setting for studying climate changes and the effects of these on ecosystems and communities in this part of the Arctic; changes that affect societies, locally as well as globally. 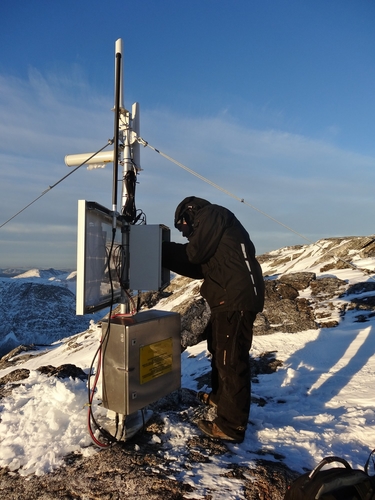 The Greenland Ecosystem Monitoring (GEM) programme was initiated in 1996 at Zackenberg research station in Northeast Greenland, as a Danish/Greenlandic initiative to study the development of the climate and the significance for the nature in Greenland. The purpose of GEM is to contribute to honouring the Danish/Greenlandic obligations to the international community, in particular the programmes of Arctic Council (CBMP/AMAP). Both Greenlandic and Danish research institutions participate in GEM, which monitors more than 1,000 different variables for, for example, glacier-melting, hydrology, biodiversity, greenhouse gasses, as well as processes in both freshwater and the sea. Today, the programme has been expanded to also include areas at Nuuk and Disko. 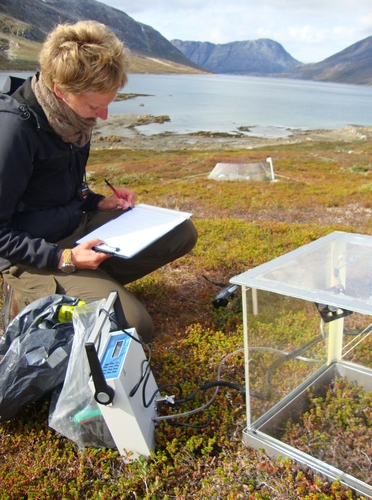 Field work at Kobbefjord. Photo: Bula Larsen
In a new strategy plan from 2017, the GEM programme will look into possibilities for cooperating with other initiatives studying climate change and the effects thereof in other places in Greenland. Therefore, GEM has taken the steps to hold a workshop at the Greenland Institute of Natural Resources with the participation of two Greenlandic (the Greenland Institute of Natural Resources and Asiaq) and five Danish research institutions (Aarhus University, DMI, DTU, GEUS and University of Copenhagen). Furthermore, representatives from the Government of Greenland will participate (Ministry of Nature and Environment, Ministry of Fisheries and Hunting, Ministry of Education, Culture, Research and Church, Ministry of Independence, Foreign Affairs and Agriculture) as well as from the Ministry of Environment of Denmark.

The workshop will be opened by the Minister for Education, Culture, Research and Church, who will provide the participants with an overview of the climate and ecosystem monitoring in Greenland. The outcome of the workshop will be a number of specific suggestions for cooperation among the participating programmes and institutions, which, for example, may increase our knowledge of the processes driving the changes in the Arctic ecosystems or utilise the understanding of these processes to predict how the changes will appear in all of Greenland.

The workshop takes place 28 February – 1 March 2018 at the Greenland Institute of Natural Resources.